Artistic Team Of The Year – Rachel Walker & Team Winners for 2012

Rachel Walker & The Sebastian Team Announced As The Winners Of The 2012 Artistic Team Of Year!

Owner of Chilli Couture; Rachel Walker and her Sebastian colleagues were announced as the 2012 Artistic Team of Year at the 2012 Australian Hair Fashion  Awards in Sydney on April 2nd. Winning artistic team of the year is a massive achievement for this collective.

This is the 2nd year that the Sebastian team have won this prestigious award. Rachel practises her creativity and unique styles at her beloved Perth organic salon Chilli Couture home of the top stylists in local hairdressing techniques, cuts and colours.

The team created the collection in Sydney in October last year. Chilli Couture is proud to have one of its fabulous owner be apart of the Sebastian Professional team and loves the success and creativeness which they bring to the salon. Well done! 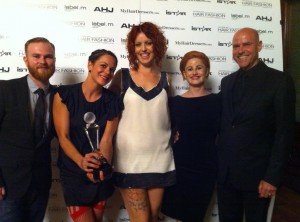 Living with Hair Loss: From Alopecia, Age, or Genetics

Think about it: you wouldn’t consider using harsh chemicals on your plant collection, or your beloved pet, so why... read more

Human Hair Wigs vs Synthetic Wigs: Which one should you get?

With an unlimited range of styles and colours to choose from, it’s no wonder that more people are looking... read more

Best Hairdresser In Perth For Your Short Summer Cut

As the weather warms up, we are all looking forward to summer. The hot temperatures and frequent beach trips... read more

Tape in hair extensions: What are they?!

When it comes to hair extensions there are a few common requests that hair stylists hear all the time;... read more

Colour Correction FAQs There has been a huge amount of colour correcting services and big colour changes walking through our... read more

Meet our lovely Miss Jilliann Cotter. The Chilli Couture family are very proud of this little one as she... read more

In July 2012, Co-owner of Chilli Couture, Rachel Walker will be climbing Mount Kilimanjaro in Tanzania, a 5895 meter... read more

Our Christmas opening hours for 2013

These hours are from 2013, if you wish to see our current hours of operation, check out our contact... read more