For all of our “Chilli Beauty Addicts”….
Visit us during March for any Guinot facial and you could be the lucky winner of our pamper package valued at $580!! 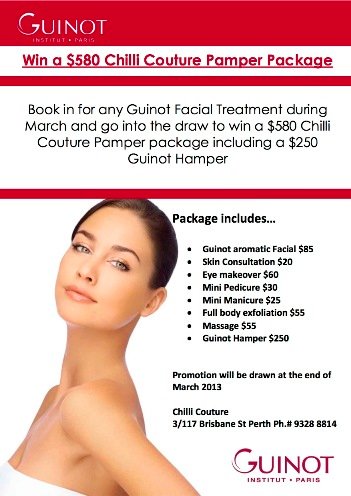 Chilli Couture Are Finalists In 5 Categories For The 2013 AHFA Awards!!!!

The program has been growing steadily each year, and now attracts hundreds of entries from salons and individuals across Australia. Entries are judged by a panel of industry professionals, each of whom brings a wealth of experience and knowledge to the judging process.

The winners are to be announced at the 2013 AHFA Gala Night which will be held in Sydney on Monday 15th April. The Chilli Couture team will be attending the event and hope to bring home more great news!

By ChilliCouture News Comments Off on Chilli Couture Are Finalists In 5 Categories For The 2013 AHFA Awards!!!! Read more...